I got 99 problems but my NAC ain´t one

This post will be all about Network Access Control (NAC) solutions and how they might lull you into a sense of security.
Designed to keep rouge devices out of your network, I´ll show you ways around it, as well as ways to protect yourself.
From a pentester´s or red teamer´s perspective this might come in handy when customers protect their networks with these kinds of tools.

A NAC acts as a kind of a gatekeeper to your local network infrastructure. Its purpose is to keep unwanted devices out of it - or at least only allow restricted access to certain resources. This can be accomplished by several measures, amongst them comparison of MAC addresses, authentication through username and password or certificates, fingerprinting, host-checks and many more.
There are also several scenarios from which such a tool can / wants to protect you. These can be employees with their private internetradio, or a technician in your OT who plugged in a router for remote access or an attacker trying to intrude your network.
If you are more the video or slides guy, I highly recommend checking out Skip´s talk “A Bridge Too Far” from DEFCON 19:
Video: https://www.youtube.com/watch?v=rurYRDlf1Bo
Slides: https://www.defcon.org/images/defcon-19/dc-19-presentations/Duckwall/DEFCON-19-Duckwall-Bridge-Too-Far.pdf

Most commonly your NAC solution will be based on 802.1x which is a standard for port based network access. It will interact with your switches (most likely and mainly via SNMP) and allow or block ports based on the rules you define.
There are 3 parties involved:

By default the ports are in an unauthorized state and will only allow to transmit and receive Extensible Authentication Protocol Over LAN (EAPOL) frames - which basically is encapsulated EAP. These frames are forwarded from the client desiring access to the network to the switch which unpacks the EAPOL and forwards the EAP packet to an authentication server - which in most cases will be a RADIUS server. From there everything goes vice versa. As EAP is more a framework than a protocol, it contains several EAP methods that allow you to choose how to authenticate. The most commonly known variants are EAP-TLS, EAP-MD5, EAP-PSK and EAP-IKEv2, allowing to authenticate by e.g. preshared keys, passwords or certificates.
The flow looks like this:

When all checks are passed, the port will be switched to authorized and thus allow the normal network traffic.

For all this stuff to be able to happen you need an infrastructure that is capable of talking 802.1x - this is your clients and your switches. And you also need something to authenticate against e.g. a RADIUS server. To manage the whole stuff, most people will rely on one of the many NAC solutions out there, which will provide you with a nice GUI from which one can manage all the rules, devices, workflows and stuff. A short overview can be found at gartner: https://www.gartner.com/reviews/market/network-access-control

I got 99 problems but my NAC ain´t one

It´s like every time with security tools that pretend to help. There are some cases where a NAC comes in handy and will help you protect your network and there are other cases where it just can´t do shit. 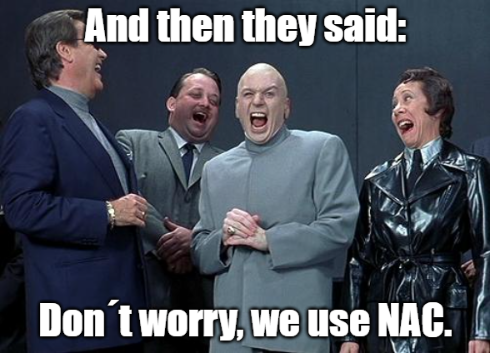 To play a fair game at this point: We have to differentiate between solutions < 802.1x-2010 and > 802.1x-2010, the latter one bringing MACSec / IEEE 802.1AE and as such implementing Layer 2 encryption between the supplicant and the authenticator - which will render mostly all of the following attacks useless. However to be able to distribute MACSec you´ll have to have your whole infrastructure compatible with this standard. As it is not broadly deployed and available outside in real life, chances are low you will ever see such an implementation.
Just for the sake of completeness: If you are looking for ways to bypass MACSec, you can have a look at the work of s0lst1c3:
https://github.com/s0lst1c3/silentbridge
It is however heavily relying on stolen auth creds (at least that´s what I read from a first quick glimpse at the paper) and from my point of view very hypothetical, but maybe worth a try. 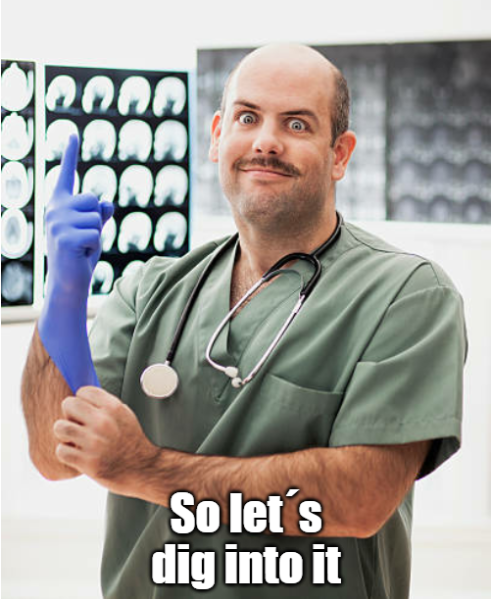 As I wanted a small dropbox to carry out such attacks, I decided to buy a Raspberry Pi 4 with some goodies:

To be even more mobile, you could also get a powerbank. For external pwnage one could extend the setup with an LTE modem. And to stay stealthier, we could leave the display and stuff away.

The Raspberry can be flushed with the official ARM image of Kali: https://www.kali.org/get-kali/#kali-arm

As I am getting older and my eyes worse, I wanted to be able to connect via SSH over WiFi, so I would be able to work from my normal notebook and not relying on the 3.5” display on longer testings, leaving it for troubleshooting purposes.
So I also set up a DHCP server via isc-dhcp-server and WiFi via hostapd.

In order to install the stuff and have it up after boot automatically run:

Next we set up our DHCP config to something like this:
nano /etc/dhcp/dhcpd.conf

Last but not least we configure our WiFi:
nano /etc/hostapd/hostapd.conf

Lastly configure SSH to your needs and we are good to go, ending with a setup like this: 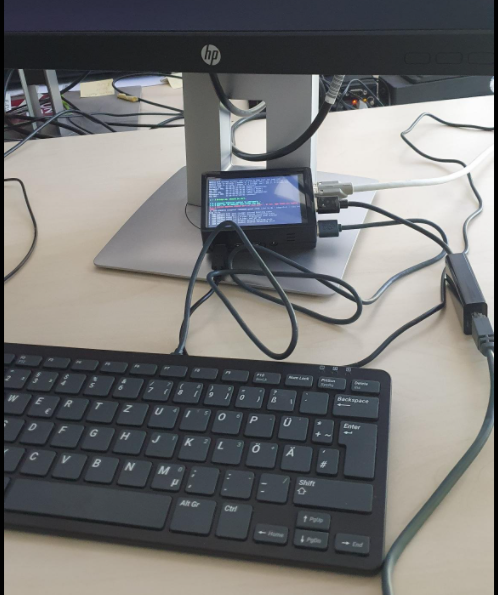 I´d like to split the whole attack part into several scenarios, shedding some light on different points of view.

No NAC at all

Yeah I know, that was stupid :) Move along. 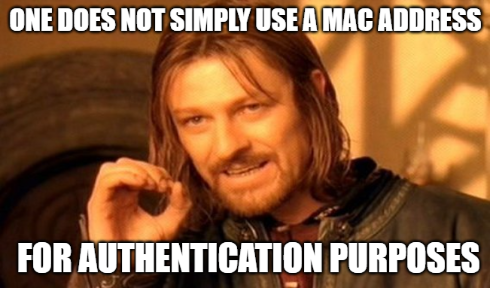 This one is a quick win for attackers. Companies will have devices that are not able to speak 802.1x. Amongst them can be printers, IP telephones, cameras and stuff like that.
This is where MAC Authentication Bypass(MAB) comes into play. The port will first check if the attached device can speak 802.1x. If not it will ask the authentication server if the MAC of that device is allowed without authentication, and if yes open the port.

All an attacker would have to do here is to spoof the MAC address. Regarding the affected devices you can get your hands on this info by:

We can then use macchanger to spoof the original system´s MAC address and swap cables afterwards to access the customer´s network:
macchanger -m 00:AB:01:CD:XY:AB eth0

Where:
-m tells macchanger we want to manually assign a MAC address.
00:AB:01:CD:XY:AB is the MAC address from the attacked device.
eth0 is the interface of our dropbox that we want to connect to the network.

macchanger might tell you, that it can´t change addresses right now. In these cases bring down the interface, change the MAC, and bring it up again:

MAC address needs to be authorized and authentication required

This is the case you´ll most probably stumble upon. The MAC is known to the NAC solution and a device / user will also have to authenticate against the auth server (doesn´t matter by what means to an attacker).

Again the first part is trivial, but we don´t have a cert or credentials for the second step to do the authentication stuff. So what now?
Well there´s two things we could do:

At this point I want to thank Mick Schneider for writing this blog post about bypassing 802.1x. Everything regarding this topic started with his post and the nac_bypass tool he wrote. I am using his tool on engagements, and it is awesome :) Thanks buddy.
During my research I found several other tools that implement the same features. You can find a list of them at the very end of this blog post.

So to get started you first need to find a device you want to attack. We might hide our dropbox under a desk, or abuse a public terminal or install an implant on a printer on the hallway.
Next we start the nac_bypass script and put the dropbox between the switch (eth0) and the victim device (eth1).
./nac_bypass_setup.sh
If you want to manually specify the interfaces you can do so with the -1 and -2switches. By default it will treat the lower device as switch side, and the next one as victim facing interface. I nearly never used these options. 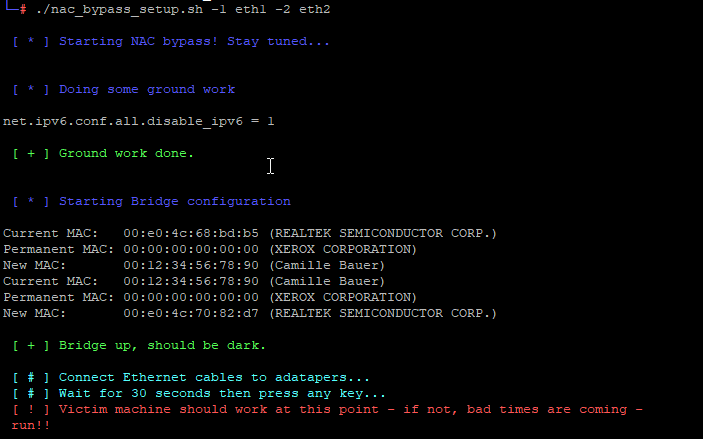 The script asks you to wait some time, so it is able to dump the needed info from the network traffic, and then to hit any key.

As you can see, it grabbed my MAC address, my IP address and the gateway´s MAC address, just as Skip described it to be the only needed info for the bridge attack.
You can now proceed and for instance do an nmap scan on the network, start MitM attacks, or just watch and analyze the traffic passing by.

As for Responder: Things got a little confusing for me at first. So I reached out to Mick directly who replied to me within minutes. I really love this community and how helpful people are. So thank you again Mick for your kind support.
You can look up the iptables rules like so to see what is going on: iptables -t nat -L
This script will put rules in place, that reroute all traffic intended for the client let´s say port 445 to your bridge.
So Responder needs to bet set up to listen on the bridge interface, but change the answering IP address to the one of the victim:
./Responder.py -I br0 -e victim.ip

And tada, I am in your network: 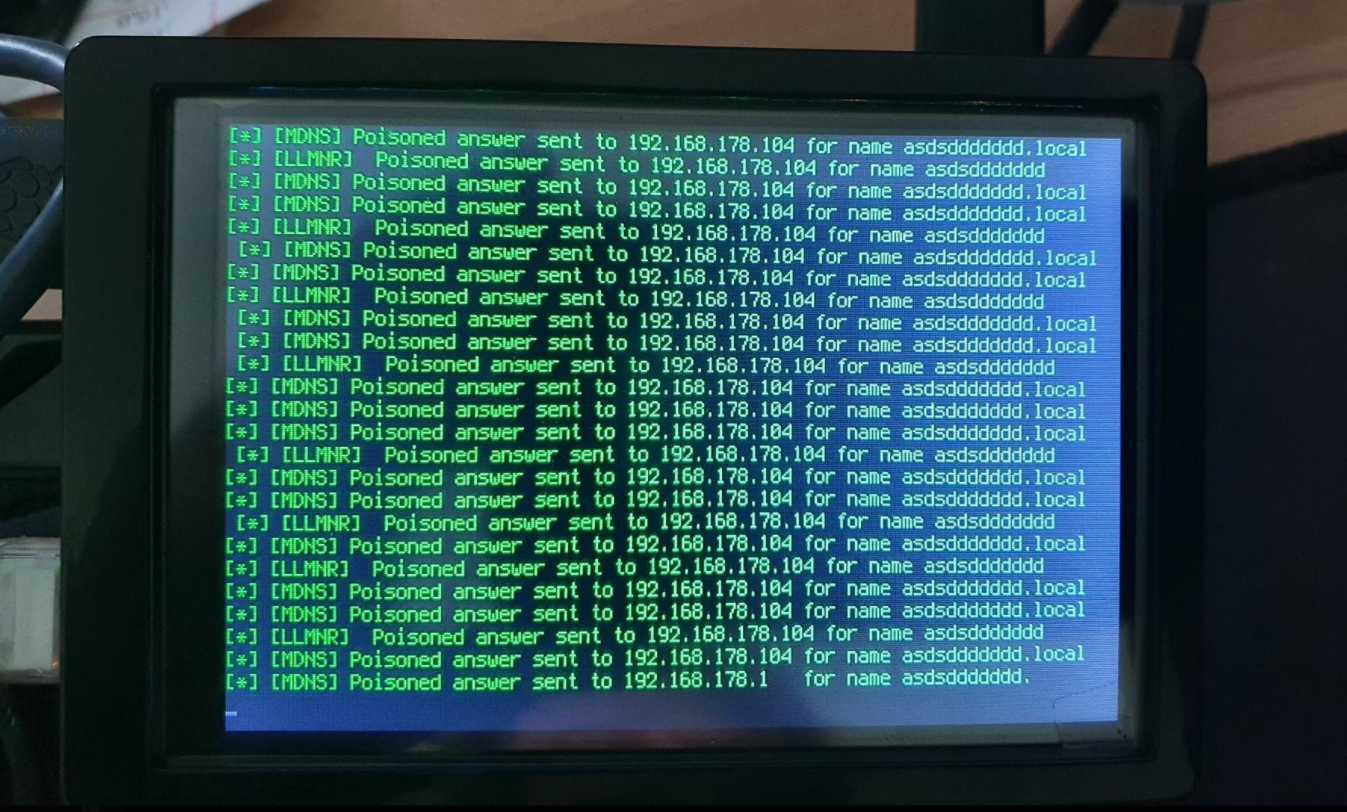 Again fetching your hashes (more wizardry in my other blog post): 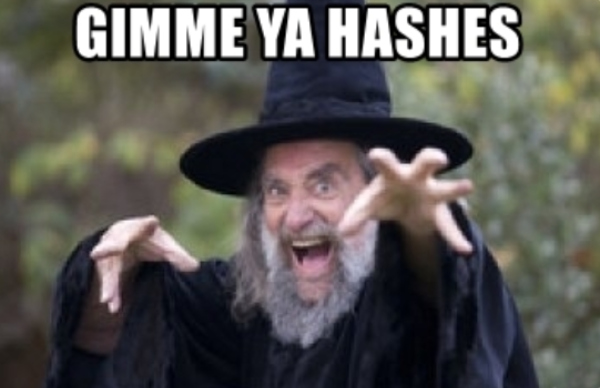 In general an 802.1x implementation will prevent employees or service providers from connecting rogue devices to your network.
To a certain extend it may also block script kiddies.
For someone who is willed and has the needed knowledge, the attacks will most likely be successful, rendering NAC (at least if < 802.1x-2010) useless.
Do your homework. Know what you are exposing, and how much security you gain by implementing NAC.

Here´s some general advice I can provide in order to keep things as secure as possible:

So that´s it folks. I hope you enjoyed this blog post.
If you have 802.1x in place to secure your network, you should by now know that it is not that secure at all.
If you know of further attacks or mitigations please let me know. Also feel free to correct my mistakes. You can reach me on twitter @LuemmelSec.